Horton Plains is one of the most unique and most scenic gifts found in the tropical island of Sri Lanka. This is conserved parkland situated upon a plateau at one of the highest elevations in the island, at the country’s mountainous heart. Semi-embraced by the great rivers of Kelani and Mahaveli, flanked by the towering majesty of the Thotapolakanda and Kirigalpottha mountains, this sun-dappled plateau is a dichotomy of evergreen forests and verdant montane grasslands.
The World’s End, the Mini-World’s End and Baker’s Falls form the trifecta of main attractions within the park, all three of which are found along a single semi-circular, 9-kilometre trail. World’s End is a 4000 foot high escarpment that affords a stunning panorama of the island, stretching even to the azure seas of the coastline. Mini-world’s end is a more easily accessible precipice with less sheer a drop while the Baker’s Falls is indubitably one of the most picturesque waterfalls found in the beautiful hill country.

Baker’s Falls is found on one of the tributaries of the Belihul Oya, and is named after the famous 19th century colonial explorer and huntsman Sri Samuel Baker. Cascading down from a height of 20 metres, the falls do not simply hurtle downwards in a mist of white; instead, white curtains of water gush over three elevations of smooth rock, into a steep gorge from which emerge flourishing ferns and Rhododendrons. The waterfall is said to be one of the spots Sir Baker would use as a resting point in his numerous hunting trips.

There are many crystal-clear pools and shallow streams in and around the waterfall, which are rather curiously overrun with trout – a fish which is not native to the island. This singular occurrence also harks back to the efforts of Sir Samuel Baker, who imported various livestock from England as part of his vision in establishing an English-style farming community in Nuwara Eliya. The chilly climes of his area mimic that of his colonial motherland, making it ideally suited to this enterprise and helping to popularize Nuwara Eliya as a popular holiday resort among Europeans, while the colony was still largely underdeveloped.

Baker’s Falls are easily accessible to visitors who trek along the well-used hiking trail, appearing seemingly out of nowhere after only a shirt journey. The more adventurous will be able to go right down to the water’s edge (although it must be cautioned that the rocks are slippery) and find their way to the large flat rock face on which they can sit and splash their feet in the falls. Tourists with exceptional bravado even take a dip in the pool found downstream, although the line between refreshing and hypothermic is rather fine when it comes to these waters.

This is one of the key natural attractions that tourists staying in Nuwara Eliya hotels are strongly encouraged to see. In terms of nearby accommodation, St. Andrews is a beautiful escape and well-reputed hotel Nuwara Eliya Sri Lanka that affords great access to both the Horton Plains and other picturesque draws of Sri Lanka’s scenic hill country. 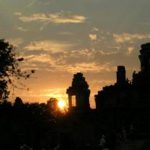