Archive
Selective travellers seeking a boutique hotel in Phuket will find an excellent choice in Thanyapura, an outstanding wellness centre offering training and sports facilities as well as a selection of health programmes.
Phuket has gained renown as an ideal setting for a romantic seaside wedding. Couples may tie the knot in this tropical paradise and spend their honeymoon in this idyllic setting. The allure of a uniquely serene and exotic locale with touches of typical Thai hospitality will make a stay in Phuket truly unforgettable. The balmy weather, friendly natives and world-class facilities combine to create an experience to be found nowhere else. Uditha Dharmawardhane is a travel writer who writes under the pen name Roland Lefevre. He specializes in creating features on leisure as well as business travel destinations across the globe.

Thailand is a country of many facets, on one hand there is the great night life exemplified in the capital Bangkok, the crowded beaches and the raunchy crowds of Pattaya, the spiritualism ingrained in the thousands of Buddhist monasteries and finally its natural beauty is evident in the mountains, the rainforests and its waterways. Thailand’s Golden Triangle is a popular destination among tourists and pilgrims for the ancient Buddhist monasteries that are found here. Some of these temples date back thousands of years and have been custodians of the faith in South East Asia.
On the other hand the, Golden Triangle is also famous for the Opium trade, it was the epicenter of Opium cultivation in Asia at one time and relics of that past still remain. An interesting place to understand the history of the Opium farmers and the trade is the Hall of Opium at the Golden Triangle Park. This rather eccentric museum chronicles the process of production, the history of the crop and also recent government attempts at replacing it. The museum also has some interesting informative multimedia presentations on the effects of smoking and hazards associated with its use.

Being a rather remote area of Thailand, the landscape of the Golden Triangle area is unspoiled and covered with lush vegetation. The countryside is composed mostly of mountains that are dotted with tiny traditional villages. Most farmers engage in rice cultivation, having given up the now illegal Opium. The Huay Mae Sak Waterfall Park is a government forest reserve that has been established to protect the natural environment of the region and is well worth the visit if you are interested in hiking.
The forest is composed mostly of mixed vegetation and is typically of the mountainous terrain. Several natural waterfalls are seen here but the largest is the Huay Mae Sak Waterfall which lends its name to the park. This interesting natural excursion is within easy reach of travelers staying at Chiang Rai hotels. Staying at a hotel Chiang Rai such as Anantara Golden Triangle Thailand gives travelers an opportunity to explore a region of Thailand that has been shrouded in mystery for centuries.

Thanuja Silva is a travel writer who writes under the pen name Auburn Silver. She has a passion for fashion and a deep interest in admiring new and exotic attractions around the world.
Google+ The perfect romantic getaway you would ever dreamt of, Chiang Rai hotels in Thailand let you get entrapped in serenity of the pristine beaches and charm of alluring natural beauty of the tropical mangroves. Nestled on a hill which overlooks Laos and Burma, Anantara Golden Triangle Thailand is a luxury hotel Chiang Rai has in store for all the fun loving honeymoon couples. Honeymoons in Chiang Rai let you take adventure excursions such as exciting elephant rides and long tail boat cruises while exploring the charming province of Chiang Rai. You can also savour mouth-watering Thai delicacies when you are in Chiang Rai on your honeymoon. Visit Chiang Rai – make it an unforgettable journey of love!

Umanga Kahandawaarachchi is a passionate travel writer who writes under the pen name, Maggie Tulliver. Her field of writing covers a wide array of content and articles related to travel and hospitality industry. 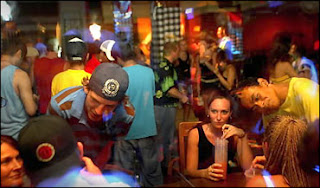 Laid back charming coastline of Bali comes alive as the sun goes down and Bali nightlife will give you an entirely different experience at Bali. It is desirable to find your luxury hotel resorts in a peaceful area and there are plenty of accommodation options available to suit your needs. Anantara Hotels, Resorts & Spas which belongs to a global luxury hotels chain is one such choice available for the travellers to Bali.

Your beach resorts in Seminyak, Kuta and Legian will give you easy access to the western coastal belt which has the most lively entertainment venues featuring live music, good food and booze. Most of the pubs and restaurants open from the evening and go on till the wee hours.

The Seychelles is a beautiful Indian Ocean nation, blessed with year round sunshine. This makes it a favourite among European travellers looking for that perfect sun and sand vacation. The beautiful golden beaches and the turquoise blue ocean are great for relaxing evenings and exciting water sports. But beneath the surface, the Seychelles is also home to some great artists who express their thoughts and desires using their chosen medium. The country has a rich cultural heritage thanks to the influence of the native African and Asian cultures as well as the colonial French heritage.

One such artist who has had much acclaim is Colbert Nourrice; he is a young painter who has really put the country on the contemporary art map. Contemporary art transcends the traditions that were adhered to by artists previously; it is a means of pure expression of one’s innermost thoughts using just a blank canvas and paint.
As such many critics see this genre of art as being the closest to the public as the message conveyed by the artists resonates easily. The Colbert Nourrice Gallery which is located on Mahe Island is a treasure trove of this artist’s work. He was awarded the third place in the 5th Annual Contemporary Art Biennale which was the first time an artist from the Seychelles had been recognized on the international stage. His artwork is primarily paintings, while an occasional sculpture has also been attempted.
His work has been inspired by traditional African tribal art traditions as well classical Asian styles; in a way it is a fusion of several continents. This is fitting as the culture of Seychelles is also a mix of African, Asian and European influences. Nourrice’s artwork is notable for its use of bold colours and vibrant designs. He attempts to tell a storey through the canvas and each painting on display at the gallery has its own tale.
As the gallery is located close to most Seychelles resorts this is an attraction that travellers can easily enjoy. A Seychelles hotel such as Raffles Praslin Seychelles allows guests the opportunity to visit several other cultural highlights on the islands.

Christmas is that time of the year filled with magic and marvel. The spiritual essence of the festival touched with color and compassion add to the beauty of this season. Marking the end of a long year, Christmas is adored and celebrated more so now as a secular festival where all faiths take part in the magical spirit of the season. With holidays and annual bonuses round the corner, Christmas is certainly an excellent time to visit Seychelles.
The crystal blue sea and the powder white beaches make Seychelles a paradise on earth. When you are in this island, time stands still. The mere ambience touched with softness and romance make Seychelles the perfect place to relax after a long years work. Seychelles has a majority Christian population and Christmas here is more glamorous than ever. In addition to the rich spiritual essence you will enjoy, the beauty and adornment of the streets are simply magical. Colorful lights twinkle inside and outside homes and stores making the island literally sparkle with festivity. Seychelles has a rich culture in itself, plenty of crafts and traditional Christmas decors are produced during this season, making perfect souvenirs to take back home. The cherry on the top is the fantastic hotel and resort offers that boom at this time of the year. With an array of beach parties, galas and festivities, Christmas is that season where you can enjoy the best of Seychelles. Seychelles ensures the Christmas season caters to all tastes and interests. For instance those who are not into partying much you can try fly fishing or sailing, again popular activities undertaken during the season. You can even dip into the ocean and explore a bit if you are more of the adventurous person.

People and places all come to life during the magical season of Christmas. In order to enjoy the best holiday experience in the island, stay at the Raffles Praslin Seychelles. This Seychelles hotel ensures you are treated like royalty fit for the magical season. You are pampered with traditional Christmas specialties and can enjoy the real spirit of the season. This Praslin hotel has both outward appearance and inward service to ensure you get the best of your Christmas holidays.